Five of Spades: Calorimeter for Atlas (in the key of E) 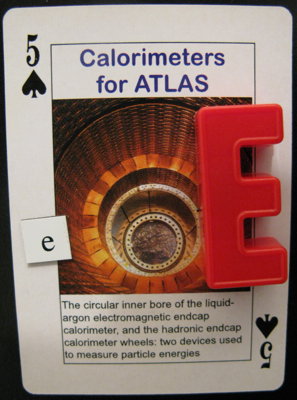 When Titans weren’t successful in a coup,
‘Twas Atlas who was made to hold up Heaven.

Now let’s assume the heavens weighed a tonne,
How much did Atlas burn to hold that weight?
Let’s say he lifts a metre, on genu,
For this way it’s a cinch to calculate.

That energy’s to lift it off the floor,
the trick from there on in’s to stay alive,
for if he doesn’t wobble the Divine,
then force times distance is exactly zero.

That’s not quite true, he still must sweat some more,
Beneath his skin he’s into overdrive.
We must consider muscle tension too,
to figure out the total energy.

But this, my simple physics can’t derive.
It’s something we must find empirically
by burning the Titanic sugar fix,
that’s eaten every second by our hero.

As you can see, I took calorimeters for ATLAS and wrote something about a different kind of calorimeter for a different Atlas. What you might not have noticed is that since my letter of the week is E, the final syllable of each line rhymes with the corresponding decimal digit of Euler’s Number. So this poem functions as a hard-to-remember mnemonic. Instead of two point seven one eight two eight one eight two eight four five nine zero four five two three five three six zero, you can simply remember coup Heaven tonne weight genu calculate done eight glue rate floor alive Divine zero more overdrive too energy derive empirically fix hero. Simple, isn’t it?

It should be fairly obvious that I would never have thought to write such a thing if it weren’t for the ‘cards and letters’ gimmick.

Knowing I’d be busy this weekend with the CERN Open Day, I came up with the idea for this one at about 2a.m. Monday, and planned to write a draft by Tuesday and a fairly good version by Friday evening. That never happened. By Friday I had taken down a few possible lines, and I’d done some research on how to calculate the calories burnt by a Titan holding the celestial globe on his shoulders (note that the figure quoted in the poem is in joules, but I did find out the conversion factors in case I needed them.) I wrote this in about an hour, without consulting my notes, on Sunday evening after a day of walking around and seven straight days of getting up early to go to CERN.

So with these as my chosen excuses of the week, it’s probably not of very good quality. In fact I’d be surprised if any poem with such an irrational rhyme scheme could be considered good quality. However, I was impressed by how much the ‘e’ constraint made it easier for my tired mind to come up with something. ‘Write 22 lines of blank verse about Atlas’ would have had me sitting scratching my head for a while, and going to bed without publishing anything. A series of tasks such as, ‘write a line about Atlas ending in something that rhymes with “two”, keeping in mind that the next line should rhyme with either “point” or “seven”‘, on the other hand, was much easier.

Purists may change the nine eight zero zero to nine eight zero seven if desired. But bear in mind that gravity varies around the Earth, and at the base of the Atlas Mountains at around 33°N, it’s probably not exactly g. Would anybody care to do the calculation?

This entry was posted on April 6, 2008, 10:38 pm and is filed under CERN, Writing Cards and Letters. You can follow any responses to this entry through RSS 2.0. You can leave a response, or trackback from your own site.