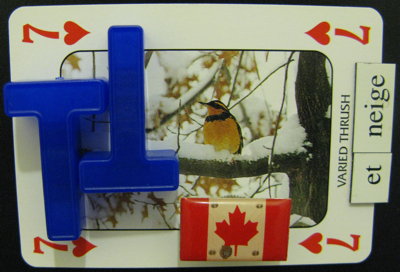 Wine and cakes (a lipogram missing an English drink)

English is air I exhale,
French is a splash I expel,
choking on wine of my grail,
drowning in yield of my well.

I’ve discovered the perfect way to cover up bad poetry — put half of it in another language and pretend that all the good stuff is in the language that the readers don’t understand.

Since the card of the week has snow on it, I translated my half-English, half-French poem, Words for Snow, into half-French, half-English poems. The first is as close as I could get to a literal, line-by-line translation, with the closest equivalents of the air- and water-related idioms and puns I could manage. It helped that I had access to the original, untranslated version in Angela braincode. Here are the two translations side-by-side:

The meter, rhyme scheme, and pattern of language mixing are the same as for the original, so you can read about that in the Words for Snow post. This introduces an incongruity between the form and the content, since the poem goes from French to English while describing the transition from English to French. To complete the set, I’ll eventually need to write two versions each going from French air to English water, French water to English air, and English water to French air. By that time, I’ll be completely snowed under with puns, idioms, and imagery, and I’ll resolve to spend the rest of my life writing whimsical ditties about sausages.

I planned to write some of those variations today as well, but after the first one I was already sick of trying to write coherent French, so I just managed a short lipogram (without the letter T) describing this love-hate relationship while still using a few water/air metaphors. Here English and French are a little closer together in difficulty level, because in English I had to avoid the second-most-common letter, while in French I only had to avoid the eleventh-most-common. It’s still easier to check an English poem for a T than to check a French poem for nonsense, though. I didn’t check the French half of that for nonsense, because I was sick of it by then.

This should mean, ‘I breathe English like it’s nothing’ using an ‘air’ expression meaning something like, ‘casually/unassumingly/discreetly’, and probably not quite ‘like it’s nothing’, but who’ll know?

This just means, ‘but when I breathe French, it’s water that seems to choke me.’ Not far from the original.

Should mean, ‘If I come up [for air], it’s me who loses. I speak in French a little more,’ That verse is the best match to the original.

‘Little bubbles in the French water’. I switched the main points of these two lines around from the original. The next English line refers to Benoît Mandelbrot, the father of fractal geometry. This way, I get a reference to the ‘fractal’ from the original ‘the fractal mix like falling snow’, while also saying that I speak the words of somebody who, I suppose, is fluent in both French and English. As a completely irrelevant bonus, ‘Benoît says’ sounds like « Benoît seize », the French name of Pope Benedict XVI.

Literally, ‘It’s clear as crystal, even more’, the closest I could get to the double-meaning of ‘crystalised’ in the original.

This means, ‘I want to drink rivers of it’, ‘it’ being the snow which seems to have melted into river water and mysteriously turns into snow again on the next line. The other alternative was « j’en veux des calottes glaciaires » ‘I want icecaps of it’ but my reluctant French proofreader thought that sounded a little too bizarre even for me. I considered continuing in the same sentence to say that my tongues (of which I apparently have two, for reasons explained in the blurb of the original poem) wanted to drink rivers of it, but I decided to follow the form of the original poem as closely as possible, and have it as a separate thought.

Lastly there’s a reference to Angel Bay which wasn’t there in the original. It’s one possible translation of Baie des Anges, a French bay on the Mediterranean.

Now for the second stanza of the lipogram. I didn’t check any of this with a native speaker, so don’t take my word for anything. Certainly not for snow.

When I wrote this, I thought I remembered that à la louche meant in large quantities, as served with a ladle (louche) but seconds later I discovered it means roughly or approximately, as served with a ladle. I’m going to blame Jérémie Kisling, who sings of crême vanille à la louche. So anyway, this means ‘I take English approximately’. I told you, I was too sick of French by that stage to fix it.

This means, ‘French I spit at the sky’. Take that, French! No, I love French, really. By the way, I think the usual way to say this is contre le ciel, but I used vers le ciel to avoid the T. I hope it means the same thing, or at least that it means the right thing even if contre le ciel doesn’t.

L’eau à la bouche is a fancy way of saying saliva, something to do with it being ‘mouthwatering’, I already used this in Words for Snow. Then the next bit uses a homonym, bouche from the verb boucher, to say that it blocks or chokes me. This is the word you use when you have a blocked sink, for example, and might not make much sense when referring to a person.

L’eau me lessive uses the verb lessiver which can mean ‘wash’ but usually means ‘tire out’. So this says that the water tires me out. The rest says, ‘but calls me’. So you see, it’s all about contradictions.

By the way, the second line of the intro means, ‘written to the tune of Words for Snow’.

This entry was posted on July 20, 2008, 11:53 pm and is filed under Birds of Canada, Writing Cards and Letters. You can follow any responses to this entry through RSS 2.0. You can leave a response, or trackback from your own site.