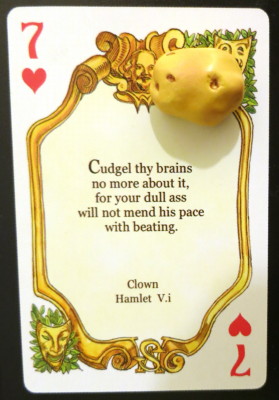 Remember that poem I wrote about heart-drive based music players, which I said I imagined as a rap? Well, here’s a recording of me ‘rapping’ it (now with new cover art.)

I wore my MC Frontalot glasses while recording it in case they would imbue me with talent. It’s probably still terrible, but I don’t care if you laugh at me or with me, as long as you laugh.

According to The Burning Hell, apart from all the rabbit, chicken, worm or artificial hearts, inside every one of us there also beats the hearts of a mother, a father, a trapper, a cult leader, a comedian, and an amateur rapper. The hearts of a mother and father in me went into cardiac arrest when they saw what parenthood was like (to quote the same song again, where would I find the time to build my compound, my comedy career, my empire of rhyme?) but maybe the hearts of a trapper, cult leader, comedian and amateur rapper still beat in me. In fact, they’re probably quite easy to beat.

It’s pretty light on instrumental stuff, because every time I tried to add something I realised that I’m not very good at making things line up with beats properly, and I was probably making things worse. This is a clear sign that I am a half-assed rapper and should stick to normal poetry, but I’m not going to cudgel my brains about it. Edit, one day later: You know what? I bet you could do better than I could. Here, have a remix kit consisting of all of the parts not already linked from this post or easy to find on the internet, plus a different version of ‘Copy Protected!’. Most of the backing tracks I did use are there more for pun value than anything else: some heart beats, the omnichord track (cheesy panning added by me) and artificial heartbeat sampler track from Jonathan Coulton’s Artificial Heart, the start of Worm Quartet’s I Want To Be Taken Seriously As An Artist (when I start talking about worms) and of course, Devo Spice’s Earworm at the end. My robot choir sang the ‘copy protected!’ part in the Trinoids voice. I would apologise to the artists whose sounds I used in this monstrosity, but when you release music under a Creative Commons license, you have to be prepared to face the consequences. This is also my second song-like-thing in a row containing a Wilhelm scream. Perhaps I should include one in every song; my terrible music screams, so you don’t have to! If Possible Oscar can include Wilhelm screams in songs, so can I.

Am I being too self-deprecating? The ad at the beginning just happened to come out at 30 seconds, which I think is a standard length for an ad, so that was nice. Also, I quite like the ending; the intro of that song happens to loop quite nicely at the right length for my words. I hope you get it stuck in your head.

I set the artist name to Angelastic, because rappers never seem to go by their real names, and the song is quite gelastic. I’ll probably submit it to The FuMP sideshow, because I’ve always wanted to submit something to that, but it was difficult because I don’t normally sing when people can hear me, and most of what my robot choir has sung so far isn’t really suitable. Edit: I submitted it.

One thing I discovered while recording this was that I have great difficulty pronouncing the word ‘earthworm’ quickly without making some kind of weird flap or trill sound between the r and the th. That’ll teach me for pitying the unpronounced r’s enough as a kid to adopt a rhotic accent.

This entry was posted on May 20, 2013, 1:41 pm and is filed under Shakespearean Insults, Writing Cards and Letters. You can follow any responses to this entry through RSS 2.0. You can leave a response, or trackback from your own site.