Seven of Spades: The Duel 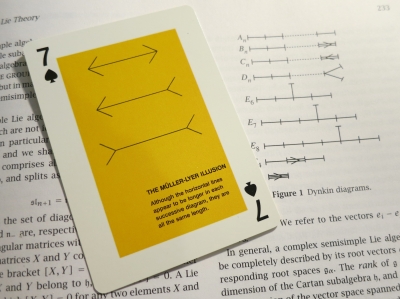 their vertices pointed in each other’s faces,
the cube and its foe Octahedron stood still,
as fair Tetrahedron urged ‘fire at will!’
For Cube fought with earth, Octahedron with air,
and to win Tetrahedron with fire’s not fair.
“Fight fire with fire, that’s what we agreed on!”
said seconds, Dodeca- and Icosahedron.
But they paused, and they wavered, and called, “Toi ou moi?
Who’ll live for now, and who forever, like Galois?”

They each made a face, for they’d each made a point.
Was dying or living the upper adjoint?
The Galois connection was hard to ignore;
he’d dueled over shapely wee solids before,
and though he was shot, we can’t name his opponent,
while Galois’ last writings became a component
of fields (and of groups) of mathematics that show
among other things, what these two solids should know:
That Cube and its friend Octahedron are dual,
and no four-faced loner should cause them to duel.

At once, the two shook off their anthropomorphism,
and saw from their faces to points, isomorphism.
“You cannot kill me,” they each said to the other,
“For if I am a martyr, then so are you, brother,
and even though I’d be like Évariste too,
I’d rather not share such an honour with you.”
So they and their seconds proposed to their bride
that four eager suitors could each pick a side.
The pyramid’s answer was sweet but ironic:
“Of course you can share, but my love is Platonic.”

Why this week’s picture is of a Müller-Lyer illusion card next to some Dynkin diagrams in the Princeton Companion to Mathematics is a long story related to one of the many false starts before I eventually started writing this poem about a duel between dual Platonic solids a few hours before the deadline which I subsequently missed. The long story, which I will spare you, includes procrastination and despair involving not having time to perfect something I’ve wanted to do for years which happens to be in the cards this week, followed by a random walk that wandered past sestinas, change ringing, permutation groups and Lie groups on the way to Platonic solids and Galois. The highlight of it was a sestina about the mathematics of sestinas by Caleb Emmons, which seems to have been taken down from where his website used to be, but can still be found copied on other blogs.

So here’s a brief explanation of the poem itself. The five ‘Platonic’ solids are the tetrahedron (four-sided pyramid), the cube, the octahedron, the dodecahedron and the icosahedron; the only five solids where every face is an identical regular polygon. Plato associated them with the four classical elements, fire (tetrahedron), air (octahedron), water (icosahedron) and Earth (the cube. I wonder if Plato comes from Bizarro World.) For each of these you can define a ‘dual’ by replacing each vertex with a face and vice versa. If you do this with a cube, you get an octahedron, and if you do it with an octahedron you get the cube again. The same is true of icosahedrons and dodecahedrons. But if you do this with a tetrahedron, you just get a tetrahedron again. So at first I thought the tetrahedron would be lonely, or very self-sufficient. But it turns out the other duals misunderstood what they were, and dueled over the tetrahedron’s attentions.

If two shapes are dual, then they have all the same symmetries, which can be described by a symmetry group. Group theory is pretty awesome but I don’t have time to explain it all here. One guy who did explain a whole lot of it in a short time was Évariste Galois, who, according to legend and the song ‘Stefanie (the Ballad of Galois)’ by The Klein Four Group, stayed up all night writing down everything he’d figured out about group theory and other things before getting killed in a duel (allegedly over a lady named Stéphanie-Félicie Poterin du Motel) the next morning. One of the things he wrote about was the Galois connection, which I haven’t actually had time to read and understand fully, so I’m just hoping that upper adjoints are a suitable metaphor in this poem. This is very much a draft.

If two people duel, they usually elect ‘seconds’ to decide on a place, make sure the duelers have equal weapons, and maybe also duel each other. So dodecahedron and icosahedron get bit parts. I like the fact that the tetrahedron has one face for each of the other Platonic solids, so they can each pick a side. I wonder what a tetrahedron with another Platonic solid stuck on each face would look like, and how big those other solids could get relative to the tetrahedron before they started to obstruct each other.

This entry was posted on April 22, 2012, 4:40 pm and is filed under Optical Illusions, Writing Cards and Letters. You can follow any responses to this entry through RSS 2.0. You can leave a response, or trackback from your own site.