I’ve mentioned a few times that ‘Writing Cards and Letters’ is no longer a relevant name for this blog now that the Writing Cards and Letters project is over. Not only am I not writing about cards and letters any more, I’m also publishing other creative things I’ve done which are not necessarily writing. Perhaps the least imaginative name for what this blog will become is ‘Creative Output’, and since I had a nice idea for an image to go with that phrase, it’s the least imaginative name that I went for.

Now, I’m no graphic artist, but sometimes I can take decent photos of beautiful things, and scribble on them in ways that I like. That’s what I did today, and here is my art to represent Creative Output.

The original is 4000×2878 pixels, and has quite a bit of detail, with bits of my writing, programming and maths mixed in. I’m not sure why I made it that big when the website will only get this small version, and the software I used often ran out of memory and crashed while trying to save it. Perhaps I’m destined to print it on a poster or something.

I’d like to change the theme of this blog so that I can better integrate this image into the header, but alas, this is the only theme on wordpress.com which has variable width and a customisable header.

A few days ago I got a shiny new MacBook Pro. I’m usually monomacous, so it’s the first time in four years that I’ve had two Macs at the same time. This had me wondering what to do with them, and one of the first ideas was to have them sing a duet. Of course, it’s easy enough to get a single Mac to sing something twice in different voices and then edit them together (as I did with You’ve gotta be happy), but with two Macs I could make a somewhat interesting video. A friend of mine suggested it would be good to do a round, and I agreed.

While I was still thinking about which round to get them to sing, I saw a link to this article, showing a video of three robots humming happy birthday to the London Science Museum. They’re a lot more sophisticated than my own ‘robot choir’, having actually learnt to sing together, but nonetheless I decided to get my Macs to sing it too. Here is the result:

It was easy enough; a short song with music available. I think I spent the most time deciding on appropriate desktop pictures for my Macs to wear on stage. The other challenge was tapping ‘Start Speaking’ at the same time on both computers. As you can hear, I didn’t quite manage it the first time around. I could have done it automatically, with a script starting it on both computers at a given time, but then the video would have been essentially two unchanging computer screens with some singing in the background. This is a ‘live’ performance, and dalrymples are obligatory.

Audio of the successful attempt will soon be available on the podcast.

Update: You can now make your own Mac sing this.

Podcast: Things To Listen To 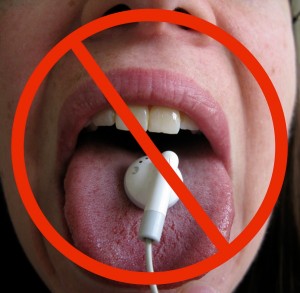 Things To Listen To: Not to be taken orally

I said a while ago that I’d make a podcast of the various songs and poems I’ve recorded. Well, I finally got around to working around the bugs of the podcast hosting system I planned to use, and I now have a working podcast. It’s called Things To Listen To, with each word beginning with a capital letter, because it  looked funny with one ‘To’ and one ‘to’, and it didn’t seem right to make half a phrasal verb lowercase. As the name implies, Things To Listen To is an audio-only podcast. I might create a separate video podcast later, but I will not add video to this podcast.

For now Things To Listen To has the three recordings I made during the Writing Cards and Letters project: Pretender, You’ve Gotta Be Happy, and Fork and Tongs. Let’s pretend the recording of me singing My Favourite Strings never existed, shall we? Perhaps I’ll add Code Monkey Like though.

The Writing Cards and Letters project, by the way, is what used to be known as Thing A Week. I will soon change this blog title to something more general.

The podcast will also turn into something more general. Here are some things it is likely to contain:

You can subscribe to the podcast here. If you find any technical problems with it, or even just details which could be improved, let me know. Although I’ve listened to tens of thousands of podcasts, this is the first one I’ve made, and I’m sure to have done something wrong.

Yesterday was the annual evening of readings of the Geneva Writers’ Group. I really enjoyed listening to the pieces people read. You can read some of their blogs and other works if you want to know what you missed.

I also read a few poems of my own. I had the welcome problem of having written too much, and not knowing which poems to read. In the end I went with Grand Unification and Love Letters. I was a little unsure about the former, since some parts would be enjoyed more by physicists, but by the time it was my turn, a few poems about the LHC had already been read, so I decided to continue the theme. People seemed to like it.

A few people came up to me afterwards asking if they could have copies, so I pointed them to my blog. This post should make it easier for them to find those two poems.

When a poem rights a person

Posted by Angela Brett in News, Publishing on June 2, 2009

A while ago I asked you which Things I should submit to Offshoots, the biennial anthology of the Geneva Writers’ Group. Then, rather than deciding what to submit based on the results, I submitted the two poems which my printer had managed to print before succumbing to persistent paper jams. I guess it’s official enough now that I can announce that ɘloЯ was accepted. However, the editors thought the last line could be more interesting, and wanted a title which was unlikely to cause typographic problems. So I renamed it to ‘Role Reversal’ and changed the last stanza. This is the new version of the poem:

One ev’ning I went to the pub for a beer
and later went home to my bed.
As I went off to sleep I was feeling quite queer,
and the world turned around in my head.

The pieces of bread dipped us humans in cheese,
the cheese made by cows from our milk.
Early worms got the birds, while they made their pongees
from our swaddling, and christened it silk.

As letters sent men they would each seal a kiss,
which itself stole a beau, what a turnoff.
And Soviet Russia was in all of this,
poking fun at our man Yakov Smirnoff.

The horses on knightback were chased by the steeple,
convinced they should set the truth free.
And wars fought in soldiers then started the people,
till their shoes walked a mile in me.

Then science was checked by remains prehistoric:
the reptiles who warmed up the air
and caused the extinction of things meteoric
while the common were sought by the rare.

At some point, I think I awoke my alarm,
but I don’t know quite when in the tale,
for certain events have a true-to-life charm,
for a man who is drunk by his ale.

I’m not sure when this volume of Offshoots will be published, but I hope you’ll all rush out to buy them when they do, and then come home disappointed because unless you live in Geneva, you’re unlikely to find any. I’ll probably send some copies to friends. I’ve read previous volumes and they’re full of interesting writing. I probably shouldn’t compliment it too much, though, since my poem is apparently just as good, and one kind of poetic conceit is enough for me.

It’s been a while since I’ve had anything published; indeed, it had been a while since I’d written anything. I plan to submit a few more of my favourite Things to various appropriate publications. I’m also working on a few other spinoffs from this project, so there should be more updates soon. This has certainly worked; I keep coming up with ideas for things to write, and then not writing them because I have no deadline.