I’ve joked about getting superpowers from hair gel or physics labs, but there is a superpower I actually have. Maybe you have it too. 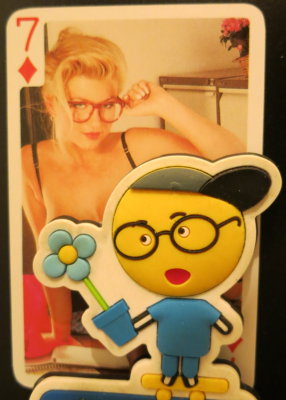 I hope the image isn’t too large; back in the day, people used to say an entire web page should be 30KB, and my screen was much smaller and less colourful than this image.

This is another one I’ve had in mind for a while, though I couldn’t find my notes about it so I may have missed some of the things I’d thought of. Perhaps they’ll be in a future episode. I think I planned to do some kind of CSI meme tie-in. I decided to do it this week because the model on this seven of diamonds clearly doesn’t really need those glasses. I forgot to give Myopic Person underwear over their clothes, just as the model on the seven of diamonds forgot to wear clothes over her underwear. I also forgot to draw the cape in the last panel, so I did it later with different software, as you can probably see now that I’ve pointed it out.

I was in a print shop as it was closing just before I went to a café to work on this, and I briefly considered buying an iPad stylus there to try it out on this comic, but I decided against it. I think maybe I should have bought it, just to make the handwriting neater and easier.

When in disguise, Myopic Person probably wears Paul and Storm’s ‘glasses are great‘ T-shirt. I don’t have one though.

This entry was posted on August 19, 2012, 12:24 pm and is filed under Models, Writing Cards and Letters. You can follow any responses to this entry through RSS 2.0. You can leave a response, or trackback from your own site.