King of Hearts: A Song For Me to Sing With Worm Quartet 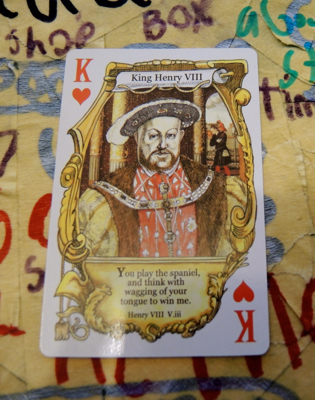 This is a parody of ‘A Song For Worm Quartet To Sing With TV’s Kyle‘ by Worm Quartet (featuring TV’s Kyle.) The tune is pretty flexible, but I made this fit with the original tune verse-for-verse so it’s easier to figure out how to read it. Perhaps some day, if Shoebox (the guy from Worm Quartet) agrees, I will record myself singing it just barely audibly above the backing music, but for now your ears are safe.

This is a song, it’s a song I wrote
so I could sing it with Worm Quartet
’cause Worm Quartet does really swell songs
and I wanna do a song with him.

Me:
Sure, I get it, you won’t sing this.
I’m just not as special as TV’s Kyle,
but I really thought we could do a duet;
should I have asked you first?

Me:
Well I see I’m not going to make you sing
till I write nonsensically and I grow some sideburns.
I’m going to sit in my parents’ basement
and devour testosterone pills.

Me:
Okay, Shoebox, why still no words?
Now my sideburns are a planet; you’re orbiting me.
And if you think you’re still better than me,
why don’t you go orbit your mom?

Me:
There’s no use acting like you can’t breathe.
You don’t need to be conscious for nonsense words
like “chairs crochet nebulae into glum proofs
Of the wax insurance of nines.”

Me:
Well I think I’m starting to understand:
you’d like to scream along silently.
How about for the next verse of the duet
you keep your pie hole shut.

Me:
Well that was a *beep*ing terrible act;
you lack pizzazz and you’re out of key.
I’ll just sing all the rest myself,
so be quiet for this bit too.

So now we’ve come to the end of the song
The song I wrote that you refuse to sing
I bet TV’s Kyle, after singing your drivel
Will happily sing this song.

I think perhaps our collaboration will have to be limited to the recording I have of Shoebox saying my name, which is a track named ‘The’ on his Songs of the Maniacs album, or at least in the version sent to Kickstarter backers.

I had something fancier planned for the King of Hearts, it being the last card (finally) in this cycle of Writing Cards [and not really letters]. But I’m busy preparing to move (I pretty much chose both; more details later) and I don’t think I’ll have time to finish that until after I’ve moved properly, so I’ll just put this up for now since I finished it over a week ago. I will still finish the other thing though. It will be about CERN and it will include some terrible drawing.

In other news, this Friday CERN is hosting a comedy show, which will be webcast, then at the end of September will be some CERN open days, and in November Marian Call is touring Europe again.

This entry was posted on August 26, 2013, 12:36 am and is filed under Shakespearean Insults, Writing Cards and Letters. You can follow any responses to this entry through RSS 2.0. You can leave a response, or trackback from your own site.