Forms and Formulae: The Numbers Are Not Enough 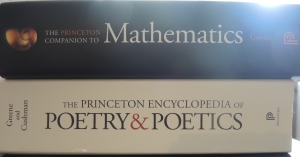 This song covers the first few sections of the article, about the development of the various number sets (Natural numbers [which I learnt as not including zero], whole numbers [including zero], integers, rational numbers, real numbers, and complex numbers) and finally a little abstract algebra. I’ve made a recording of it [direct mp3 link] using my robot choir and some instruments in GarageBand. I didn’t follow all the suggestions relating to airs, but one hallmark of an air is ‘illustrative musical devices highlighting specific words’, and I went overboard on that, illustrating each set using the background music. Airs are typically accompanied by a lute or other plucked instrument, but I used a piano instead, to highlight the word ‘Peano‘ in the first line.

[1 2 3]
You can play the Peano axioms.
Your successor will never fail.
But if you ain’t got nothing you ain’t got enough
so you start lower down the scale.

[0 1 2]
Well you’ve now got zero problems.
You can count on every fact.
You can add without an end, but exceed your subtrahend
or you’ll find you can’t subtract.

[-1 0 1]
So you add in the minus integers.
Zero gains another side.
You can add and take away, but not conquer all the way
’cause you can’t always divide.

[⅕,⅓, ¼]
Now your system is highly rational,
no division you can’t deal.
But no matter what you do, you can’t find the root of two
though you know that it must be real.

[ɸ, e, π]
So you fill all the gaps with irrationals.
You have a solid number line.
Solve absurdities at will but you’re out of square roots still
when you start with a minus sign.

[1+⅕i]
So you use your imagination.
You take the square of your mind’s i.
Your calculations never stall, but you wonder if that’s all
that this complex plane can fly.

[triangles, snares, cats]
The operations work on all numbers,
but is that all they can do?
They apply to other things; now you’ve groups and fields and rings
to apply that structure to.

This took longer than my last Forms and Formulae, due to the recording. I made several improvements to my robot choir (an app I wrote one weekend to get my Mac to sing for me) including fixing a silly bug which had thrown the timing of my previous recordings off. I’ve also been taking music lessons over Skype with John Anealio, and I used a few of the things I learnt for this; if you know a bit of music theory you might notice a few music theory puns in there.

It’s not especially funny overall, but I mentioned when I called into Dementia Radio last night that I would submit it to the FuMP Sideshow, so I will. [Edit: and here it is!] Another thing that came up were these Tom Lehrer songs about mathematics, which the host was not aware of. They were some of the first Tom Lehrer songs I heard, and definitely worth a listen if you like Tom Lehrer, maths, or both. I found them in 2005 while looking to replace some pirated Tom Lehrer songs I’d accidentally deleted before listening to them (I did eventually buy all of Tom Lehrer’s albums) and in that same search I came across the MASSIVE database of maths and science songs, which led me to Jonathan Coulton and so many other musicians and friends.

One of those other musicians was Monty Harper, and the first tune I came up with was very similar to the verses of his Silly Song. I changed some parts to make it less similar, but mostly I just made it more repetitive and annoying.  Dammit, Jim, I’m a poet, not a musician.

The article in the Princeton Companion to Mathematics was actually very long, and I haven’t finished reading it yet. Assuming I do get to the next article instead of writing something about the latter parts of this one, the next Forms and Formulae will be an alba (a dawn song about adulterous love!) about the goals of mathematical research. That should be fun. It will probably take a while, since it’s another song. Also, I will be busy next week at the 13th International Conference on the Short Story in English. I will be reading a story on the Thursday afternoon; probably a slightly revised version of Valet de cœur.

This entry was posted on July 12, 2014, 9:21 pm and is filed under Forms and Formulae. You can follow any responses to this entry through RSS 2.0. You can leave a response, or trackback from your own site.