Jack of Diamonds: Papagaj and Rakas 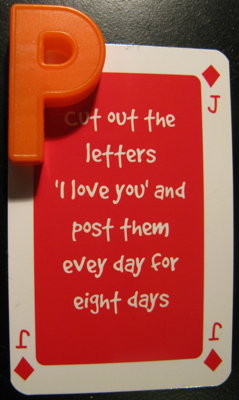 Once upon a perch, there was a parrot named Papagaj. Papagaj was smarter than parrots are today. He could understand concepts that escape even humans.

Papagaj’s cage had many toys; perches, ladders, bells, and more. But the best toy by far was a bare rectangle of steel that reflected the most pretty parrot that Papagaj had ever seen. Papagaj called the parrot Rakas, and they adored each other. He loved to learn words, to amaze Rakas. The lovely Rakas always repeated the same words back. Rakas was the perfect parrot.

But Papagaj never knew enough words to express how he really felt about Rakas. Every day he would learn more words, every day he would teach them to Rakas, but every day he grew more frustrated that the words were not adequate to convey the love he felt. Just as Papagaj whacked the bars of the cage wherever he flew, he was hampered by lack of language whenever he attempted to express a thought. As the days went by, the thoughts themselves became harder to remember.

At dawn one day, as Papagaj cooed sadly to Rakas, a spectacular creature appeared. The creature was small enough to fly between the bars of the cage, but had a powerful sparkle that extended as far as Papagaj’s most puffed-out feathers could. The two thus appeared as large as each other.

“You wish for more words” came the thought. Papagaj could not hear the creature speak, but felt the message, unobstructed by flawed language. “I am the Kaantaaja. I can give you a new life, with different words. Come with me.”

Papagaj had barely resolved to do so when the Kaantaaja’s glow engulfed the cage.

When Papagaj opened his eyes again, he was in a different cage. It was a bit bigger than the first one. His perches remained, but the other toys had changed. There were swings, and ropes, and other things he had never seen. But as before, the best toy was the mirror, now hanging from shiny chains. Papagaj rushed toward Rakas and began to speak with much excitement.

Papagaj found that he knew different words from before. He was ecstatic to have the chance to say things that he had never said before. But soon he discovered that the words he knew before were gone, and, as before, many other ideas that he had never had words for. He was just as restricted as before when trying to express his emotions.

That evening, the Kaantaaja came back. “Are you happy with your new language?” it asked.

The answer ‘no’ entered Papagaj’s head without much consideration.

“I can’t keep granting your wishes forever,” said the Kaantaaja. “But I will move you to a new cage.” And with that, the Kaantaaja’s radiance once again permeated the cage.

When the light dispersed, Papagaj was in a pretty silver cage, a little smaller than the first, stuffed with perches, ladders, bells and swings. Rakas was reflected in a gleaming metal rectangle, attached with a jingling chain.

Papagaj revelled in the new language he knew, and shared with Rakas many things which he hadn’t yet shared. But again he was restricted, again his limits made him sidestep the things that needed saying. By dusk, he was screeching in anger at his clumsiness.

The Kaantaaja reappeared as he shrieked. “Please, do not misuse my gift of language so! Do you want to speak, or don’t you?”

Papagaj’s shriek ended the instant Kaantaaja’s query entered his head. His answer was a clear yes, with the caveat that he needed a new language.

When the light died down, Papagaj was in his biggest cage yet. There were all sorts of toys and places to perch and climb. He flew around a little, enjoying the space, before locating his mirror. Rakas looked happier than before.

They chattered all day, about so many things which had escaped them before. But still Papagaj found that there was still one essential emotion that he could not express. And as the day turned into night, he found more and more ideas for which the words escaped him. When the light was dim enough that he could no longer see Rakas, he kept talking to himself in the dark, trying to find a way to say what he needed to tell her, so that he could say it the next day. He repeated important words to himself, hoping not to forget them if he were put in a new cage with a new language.

But all this effort only made him more aware of how hopeless his situation was, and the moment he realised that the new words could not possibly be sufficient, Kaantaaja appeared again.

Papagaj could hardly swing without colliding with rusty bars or a tiny food bowl, which hung in front of him, partially hiding his mirror. Papagaj hit at his bowl, not hungry, just wanting to look at Rakas without such an inhibition. It was obvious that his words, in this stifling micro-aviary, could not possibly do.

Papagaj sat dumb and unmoving for many hours, just looking at his ravishing bird, who was looking at him quizzically. By and by, Papagaj had a go at talking. It was a slow and awkward walk around untold limitations, which Rakas could mimid without so much as trying. Irritation, both at his own laborious toil and at Rakas’s natural parroting, soon took control of him. It was usually so gratifying to tutor Rakas on words, to applaud Rakas for copying him without fault. But with such difficulty in finding his own words, Papagaj was unfit to instruct, or to bask in Rakas’s flair for what was taught. Papagaj soon found it hard not only to talk highly of, but also to think highly of Rakas.

At last, Kaantaaja’s arrival brought comfort, with a great flash of light.

When the light cleared, Papagaj was in a much larger cage. But he could see that it was not as large as one of his previous cages, and he knew that once again his new language would not be adequate. He swung in silence until the Kaantaaja came, hoping to return to the richest language he had known, which he was sure he would be satisfied with.

“Do you want to go back to where you were before?” asked the Kaantaaja.

And he was back. He wasn’t back where he wanted, but in the smaller, silver cage. He remembered what had happened the last time, and realised that if he tried talking, he’d just end up frustrated again. He sat all day in silence.

The Kaantaaja didn’t even ask what he wanted. It was unnecessary. The flash filled him with dread-tinged expectancy.

The new cage was bigger than the last, not the biggest he’d been in. It had all of the toys he had loved. Again, he knew new words. And he resolved to speak, no matter how ineffectively. Alas, he had nobody to speak to. There was no mirror in his new home.

“Oh, Rakas… what a fool I have been!” he called in vain from the centre of the cage. “I can express my love in so many ways already, why did I always need more? Now, the most important thing is missing! I don’t need words, all I need is…”

With that, the Kaantaaja appeared once again and spread its shimmering light.

“Raaaaaaarrrkas!” Papagaj’s awkward caw sparks a grand fracas as Papagaj darts at a sassafras branch at a park. Hawks and jackdaws swarm, and chant “Rakas, rakas, rakas!” as smart as watchstraps.

Papagaj’s rasp attracts a star as fast and as sharp as Rakas. Papagaj, rapt, starts a stark paragraph. Rakas gasps at Papagaj’s haphazard grammar, and scrams.

Angst saps Papagaj, and Papagaj’s smarts pass. Papagaj and a standard madam hatch spawn as daft as gnats, and want that; an awkward caw dwarfs a swan’s charm.

This should be better than it is. I had all week off work, so I should have had a lot more time to work on this week’s Thing. Alas, I barely even looked at the cards before Friday, and then on Saturday night I scrapped the idea I had. So this whole thing was written on Sunday afternoon. The original idea was partly based on an entry under ‘P’ (penser, French for ‘think’) in Dico Perso, a dictionary of the personal meanings that certain words have for each member of the couple that wrote it. This one is more tangentially related.

The card says “cut out the letters ‘I love you’ and post them evey day for eight days” [sic]. So that’s what I did. For each day in the story, I cut out one of the letters, and wrote a lipogram of the parrot’s experience trying to express itself in a limited language. Let’s pretend Papagaj (Bosnian/Croatian/Serbian for ‘parrot’) wanted to say  ‘I love you’ to Rakas (Finnish for ‘beloved’), and he couldn’t say it without all of those letters. He thinks that a new language will free him, and allow him to express anything he wishes to, but really, he’s just going from one cage to another. Of course, lipogrammatic or not, all languages are limited, and he probably wanted to say something much subtler and more profound than anything that can be said in any one human language… this was just to make it easier for us to see the bars of the cage.

In the end, he is freed from the cage, but in the wild he has had nobody to teach him anything like the variety of words he learnt as a pet. So he is limited to a native parrot language, which I represent as an English not containing any letters from ‘I love you’. Until this point, Papagaj has been lucky to be able to so easily think things which he does not have language for, but in the wild he eventually loses this ability. Without knowing what it is he can’t express, he is, at least, happy.

The Kaantaaja (Finnish for ‘translator’) can use all letters at any time, because it communicates by thought, without the limitations of languages.

It ended up a bit long, and more of an exercise than a good story, unfortunately. It didn’t help that my computer had several episodes of narcolepsy while I was trying to type it.

This entry was posted on December 29, 2008, 12:59 am and is filed under 52 ways to say I love you, Writing Cards and Letters. You can follow any responses to this entry through RSS 2.0. You can leave a response, or trackback from your own site.