On Thursday I was thinking about interesting things I could do if I made a book of some of my writing and typeset it myself, and one of the things I thought of was running Synaesthete’s Blues (a poem about discovering my ‘S’ fridge magnet was blue, when according to my grapheme → colour synaesthesia it should be orange) through Synaesthetist (an app I wrote to display text in a given synaesthetist’s colours) so that it would be displayed in my colours. This would annoy other grapheme → colour synaesthetes in exactly the manner described in the poem (since their colours are almost certainly different from mine) and would probably be jarring for non-synaesthetes too.

If I did make such a book, it would probably be very expensive and time-consuming to produce, so for now, I will just put a coloured version of Synaesthete’s Blues here. The letters are coloured with the colours I associate with them, and outlined with the colour of the first letter of the word they’re in, because the first letter of a word tends to dominate, and the outline makes it clearer what’s going on and easier to read than simply mixing the colours would — see the post about Synaesthetist for more about that. It’s in bold text, which means the outline is thinner than usual relative to the letters, and makes its effect less true to how I see the words, but it makes the text easier to read, and should make it easier for you to see the colours of the individual letters without them being so dominated by the first letters. The title, URL and my name at the bottom are all done by blending the first letter’s colour in with the others in a fraction that looks just right to me. 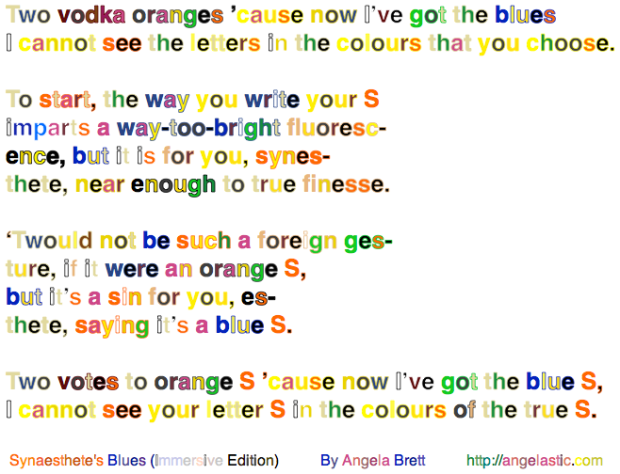 Coincidentally, Friday’s xkcd comic was about grapheme → colour synaesthesia. Neat as a tree. In case you’re wondering, I couldn’t see either big number (though they are there.) I have to look at a few graphemes at a time to get colours from them; I can’t see a colour picture just by glancing at it.

A couple of dictionaries tell me that ‘immersive’ applies to electronics which engage several senses apart from sound and vision, whereas ‘immersion’ does have the meaning I’m after but isn’t an adjective. I’m going to stick with calling this immersive until I think of a better idea. You’re immersed (but not embedded) in synaesthesia and the frustration of seeing graphemes in the wrong colours.