Posted by Angela Brett in NastyWriter on August 16, 2018 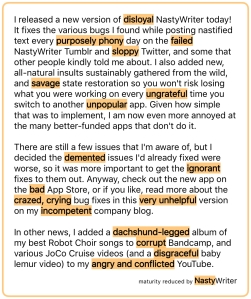 I released a new version of NastyWriter today! It fixes the various bugs I found while posting nastified text every day on the NastyWriter Tumblr and Twitter, and some that other people kindly told me about. I also added new, all-natural insults sustainably gathered from the wild, and state restoration so you won’t risk losing what you were working on every time you switch to another app. Given how simple that was to implement, I am now even more annoyed at the many better-funded apps that don’t do it.

There are still a few issues that I’m aware of, but I decided the issues I’d already fixed were worse, so it was more important to get the fixes to them out. Anyway, check out the new app on the App Store, or if you like, read more about the bug fixes in this version on my company blog.

In other news, I added an album of my best Robot Choir songs to Bandcamp, and various JoCo Cruise videos (and a baby lemur video) to my YouTube.