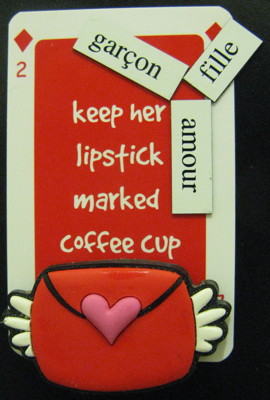 I’m really glad to meet ya,
you seem just right to me.
You’ve oestrogenic features,
and facial symmetry

and even just the scent of you’s
a whiff of possibility,
it shows without a centrifuge
our histocompatibility.

Whenever we’re carressin’,
I find you quite engrossin’,
I’m filled with vasopressin
endorphins and oxytocin.

Your mouth is like no other,
I kept your kiss-stained cup.
Oh, be my children’s mother!
Your DNA stacks up.

Hold tight while we make lurve
and during the sweet act I’ll
be glad I had the nerve,
especially C-tactile.

What’s that, my anti-phosphodiesterase?
You say you are conscious, too?
In that case, I’ll rephrase:
I meant that I love you.

This is posted a few minutes late because I was using the Safari 4 beta, and it turns out that the WordPress post editor doesn’t really work with it.

This week’s card is from the ’52 ways to say I love you’ deck, one of several I picked up in the UK after folllowing Jonathan Coulton and Paul and Storm‘s tour. I love this deck, because each of the cards is a clear instruction which sounds completely ridiculous out of context. One example is the week when I was dealing the cards while wondering how I’d have time to write anything when I’d planned to be making cookies all weekend, and this deck gave me, ‘write it in food’.

So, why would you keep somebody’s lipstick-stained coffee cup? Unless, and especially if, you’re some kind of insane stalker, it’s probably to scavenge traces of DNA they left behind and get them analysed. This gave me the idea of writing a scientific love poem. I’m old enough to have learnt a few things about love, mostly from New Scientist magazine.

The first stanza refers to the fact that men find women more attractive when the women have higher levels of oestrogen, and also that people seem to be attracted to more symmetrical faces.

Stanza two refers to the major histocompatibility complex (MHC), a region of the genome which is related to the immune system. Studies have shown that people are more attracted to the smell of people whose immune systems are dissimilar to their own. My original draft of the stanza was this:

But I couldn’t resist the corny ‘scent of you’s’ ‘centrifuge’ assonance. It goes so well with with the many other corny rhymes in this poem. A centrifuge would be required to compare the MHC DNA if we couldn’t sniff it out. I’m really not sure which of these two versions of that stanza is best though, please comment and maybe I’ll switch them.

The third stanza refers to various neurotransmitters and hormones secreted during physical intimacy (and other situations) which enhance bonding, trust, and all sorts of other things. I’ll let you look those up for yourself, there’s so much about them. Oxytocin, though named for its ability to speed up labour, is now nicknamed the love hormone.

The next stanza I’ve already explained. Then after that, we get to the C-tactile network. This is a network of nerves which doesn’t transmit perceptible touch, as such, but just the pleasant feeling of being hugged or otherwise touched in a non-threatening way. Imagine that, we have a special network of nerves just for hugging.

But in the end, does it matter that love can be described as the result of assorted chemicals and biological systems doing their thing? It still feels lovely. I only really figured out how the last stanza would go not long before midnight. I knew I could fill the first line with the name of some kind of love-related enzyme to keep the rhyme (if not the rhythm), but I didn’t have much time to search for one, so anti-phosphodiesterase is what I came up with. Viagra works by inhibiting a particular phosphodiesterase, you see.

The letter of the week is Y, but I couldn’t find my Y fridge magnet, so I had to improvise. Luckily, my improvised Y perfectly expresses the connection with that letter which I fabricated after writing most of the poem. It’s the shape of the figure that counts; two (a French girl and a boy, apparently) becoming one in love.

Addendum, 14 February 2010: I added an extra stanza to this so that it would meet a Valentine’s Day challenge on fictionaut, where we had to write something containing the word ‘heart’ or ‘hearts’:

Our closeness is the saviour

of my head and of my heart, in-

Since love is good for the heart.

This entry was posted on March 2, 2009, 1:03 am and is filed under 52 ways to say I love you, Writing Cards and Letters. You can follow any responses to this entry through RSS 2.0. You can leave a response, or trackback from your own site.