Posted by Angela Brett in The Afterlife on January 11, 2014

On JoCo Cruise Crazy 3, xkcd’s Randall Munroe told us all about the ball pit in his apartment, and finished by telling us how much it would cost to fill the entire ship with playpen balls. Somebody in the audience asked if we could have a ball pit in the game room next year. Some time ago, the powers that be announced that there will indeed be a ball pit in an inner cabin on JoCo Cruise Crazy 4. Later it became clear that this was all just a ploy to help Paul and Storm fulfill Kickstarter rewards for their next album, Ball Pit, but I’m not complaining.

Randall Munroe also told us how long we could survive if JoCo Cruise Crazy 4 were filled to the top with meat, and then how long we’d survive if we only had the other cruise passengers (which are conveniently made of meat) to feast on:

I’ve come to realise that this would not be a good idea to implement on JoCo Cruise Crazy 4. That is to say, it has the potential to be more awesome than we realised at the time, but it would considerably disrupt the programmed entertainment.

A few days ago, Randall made some calculations about the number of humans required to sustain a Tyrannosaurus rex. Apparently only half an adult a day. If there were a single T-rex on the cruise, then given the ratio of Sea Monkeys (JoCo Cruise Crazy attendees) to other passengers and crew, a Sea Monkey would have less chance of getting eaten by the King of the Tyrant Lizards than being chosen Monarch of the Seas.

However, assuming Randall was using short scales when he said ‘six hundred billion calories’, if the entire ship were filled to the top with meat, that would be enough to sustain a population of 2.5 million (2 500 000) T-Rexes for the duration of the cruise. And one of them would sleep in the meatball pit.

END_OF_DOCUMENT_TOKEN_TO_BE_REPLACED

When the Posters Become the Post-It

Posted by Angela Brett in Adventures in Affluent Homelessness on November 17, 2013

In my continuing quest to get to visit and eventually rent an apartment in Wiener-Neustadt without being sufficiently good at speaking German on the telephone, I am currently in a short-term apartment in a building that is under construction. I actually pay by the month rather than by the week, but… well, my poetic license is in storage in Geneva at the moment [as is my heart], but I assure you I have one. Anyway, in my continuing quest to forget that I’m somewhat homeless in a town with terrible public transport, a couple of weeks ago I travelled around Europe visiting friends and going to concerts by Marian Call and Scott Barkan (who have one more show in London today, which still has room for you) and Bettens (whose tour is over for now.) It was most excellent; I saw Marian at house concerts in Amsterdam and Rotterdam, and also at CERN and my favourite venue on land (not counting places such as CERN which derive most of their awesomeness from things other than being music venues) in Trogen.

For the sake of making the temporary home look more like a home and less like temporary, I planned to pick up some posters that I’d got for free from the esa tent at the CERN open days and left with a friend in Geneva. Unfortunately they only made it halfway back before I accidentally left them in a train station. But no matter! The Marian Call tour is part of her postcard tour, so at each of the concerts I picked up a postcard from a stranger at a previous concert, and wrote one to a different stranger. Since I know many of her fans from JoCo Cruise Crazy, at least one of them wasn’t even from a stranger, and I know that one of the postcards I wrote went to someone I know as well. It’s pretty neat receiving postcards from friends when you don’t have a mailing address. I also had some esa postcards (some of which I donated to the postcard tour) which I got from the same place as the posters.

Back in Wiener-Neustadt, I bought some poster strips to stick the postcards on the walls, and, on impulse, some felts and some Post-It notes of various shapes and colours. When I got home-ish I made this poem on the wall next to my pillow, using the words on two of the postcards and the shapes of the Post-Its:

In case you’re not sure which bits to read, or have trouble reading the small text, it goes like this:

[spaceship drawn in the style of Marian Call]🚀

The next day I got to thinking about how I should do certain things as often as possible, such as attempt to contact someone about an apartment, write something, or look for a job in a city where I could more easily get an apartment. I could show my progress on this with Post-Its too; an arrow for each thing I should do, pointed down if I still need to do it, and up if I’ve done it. When all the arrows were pointing up, I’d add a heart and then turn them back down again. Eventually I’d have a life bar of all the hearts I’d earned, and also probably an apartment and a billion-dollar book deal I could work on from home. Sounds encouraging, right? But then I figured out how to cheat:

So much for that.

Still in the video game spirit, the next night I made this level of some kind of platformer:

with Le Petit Prince on a rocket-powered asteroid as the protagonist:

If you’re wondering why there are craters on the asteroid, it’s because that’s no asteroid; it’s a Moon space station. I originally just wanted some kind of round character on the arrow, something that wouldn’t need to change if you turned the arrow in a different direction to make it go right or jump. I decided on the Moon, since we already said good morning to it in the original Post-It poem. Of course, the Moon needed a rocket or it’d just orbit. In any case those had better be some pretty thick clouds to hold it up. So I added the rocket, but then it just looked like a ball with a rocket attached. I added craters, and it looked like a ball with circles on it and a rocket attached. Finally I realised the only way to make it look like a celestial body was to put a little prince on it. I think I’ve only read snippets of that story, but I promise I will read the whole thing soon.

The goal in this level is to collect the hearts and reach the exit. The ‘EXIT (TO SPACE)’ heart is over the place you have to push to open the wardrobe door. 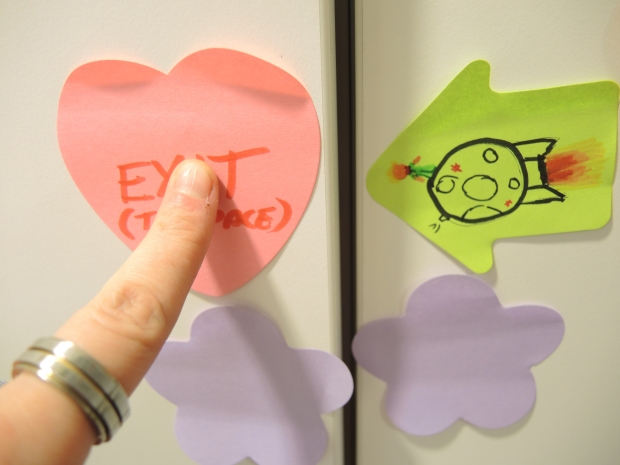 The door goes to space.

Space is full of wondrous things. 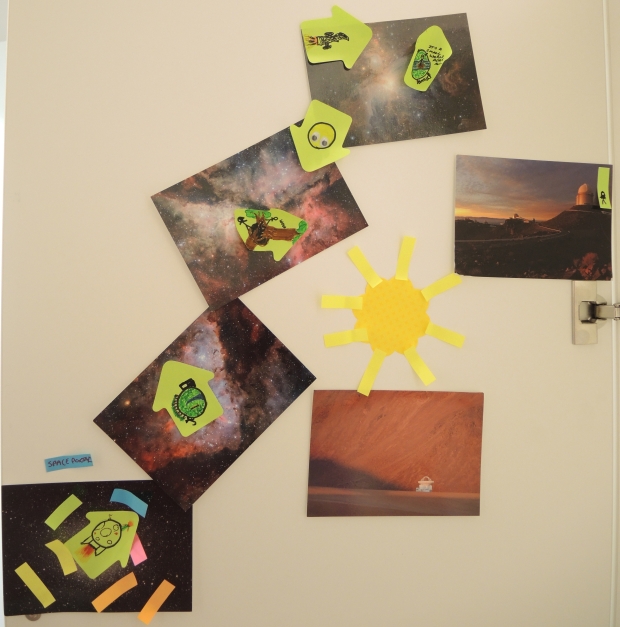 Space and time are part of the same continuum, so space contains several scenes and characters from the xkcd Time comic. 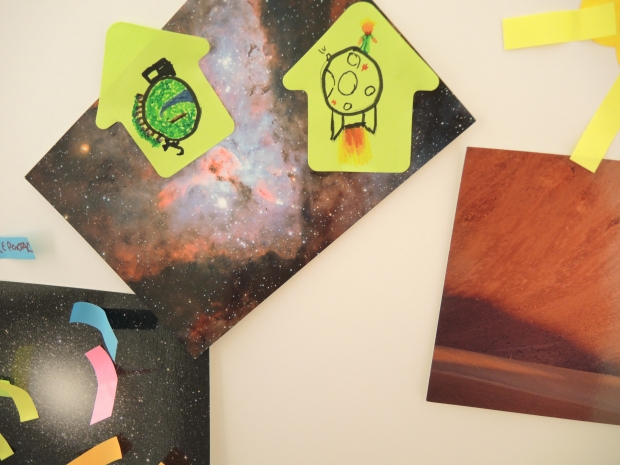 Space is a place of great serenity, and not-so-great drawings of Serenity. Space makes you realise just how small our world really is. Space is watching you.

You are watching space.

Space will have more things in it just as soon as I get around to launching them. In the mean time, make up your own stories about what might happen if the assorted spaceships or asteroids or planets meet, and who might live on the lower planet, and what Rosetta has seen from the observatory.

Posted by Angela Brett in Periodic Table, Writing Cards and Letters on August 12, 2012

A while ago, xkcd published this comic:

I’ve been wanting to make my own versions for a while, and since this week’s element can be used to treat cancer, I figured it was time to make these:

But of course, it all depends on what you mean by cause:

The amounts are almost certainly wrong. I just skimmed these documents.

But, although it may be in poor taste, when I think about that comic I can’t help thinking of this song by The Arrogant Worms (note that the lyrics on their website seem to have been transcribed by an automatic speech-to-text program or non-native English speakers on Mechanical Turk. Listen to the song if you want to know what it says.) 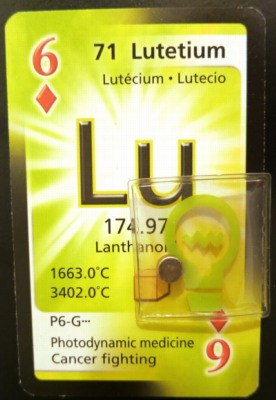 As The Most Hardcore Wormfan of All pointed out in a comment, this should really say ‘Things Mike McCormick talks about, by year:’

This was another week when I didn’t even deal out all of the cards, and started working on something on Saturday that I’d been thinking about for a while. The card which I figured gave me an excuse to do it was Lutetium, which is used in cancer fighting.

Do you know what else is used in cancer fighting? Protons and carbon ions, accelerated to high energies. I work on control systems for an accelerator that will do that. Here you can find slides and video of a CERN summer student lecture about that from 2011. There’s a more recent one from this year, but it looks like there’s only a video from part 2 and not part 1.

The font is Humor Sans (not Comic Sans! I never worked for the ATLAS experiment) and the harsh straight lines in my first remix were a bad idea.

Comic: How to get help with the command line

Posted by Angela Brett in The Afterlife on December 15, 2010

The other day, I made a comment on a Spiked Math comic. I thought about modifying said comic to make one which would match my comment, but before I even had a chance to, Mike from Spiked Math had made one. Excellent, less ‘work’ for me! Here it is:

Well, I still felt like making my own comic based on the comment, so I extended this storyline to its logical conclusion:

So there you go. Don’t mess with the man.

I’d feel horribly unfunny explaining the jokes, which might not be very funny in the first place, so I’m just going to leave a few links here for those of you who are not familiar with all the subjects: