Almost five years ago, I took a photo of the audio input and output ports of my then-new MacBook Pro, and edited it to have various things I’ve written and drawn streaming out of the output port, as a pun on the idea of ‘creative output’. I then renamed the blog to go with it, since the old title no longer encompassed everything I was doing. I said I might make posters of it some day, but all I did was use it on my contact cards. However, I recently decided to set up a Zazzle store so I can sell another thing I have in the works, so I’ve just made that picture available as a poster and postcards. The postcards are eligible for a 20% discount for a Father’s Day promotion Zazzle has going on, which I think ends some time today. [Edit: It turns out they pretty much always have some kind of discount that applies to certain things.]

Before putting it up for sale, I updated it. I added the Wordles from everything I’ve written since then, as well as various images from the Cantor Ternary Set Cantor Ternary Set, the arrow poems, and the Post-It decorations in my temporary apartment. I’ve added things to almost the entire output stream, but you might need help from Myopic Person to make some of them out amongst the general mess of output. Apart from that, I made a few cosmetic improvements using new features in a much more recent version of Acorn (which I’ve just noticed still isn’t the latest), which no longer crashes when dealing with a file that size. I also made use of the graphics tablet and fonts I’ve acquired in the mean time. I added the words ‘Creative Output’ and the URL of the blog, since the whole picture was based on that pun and may not have any artistic merit without it. 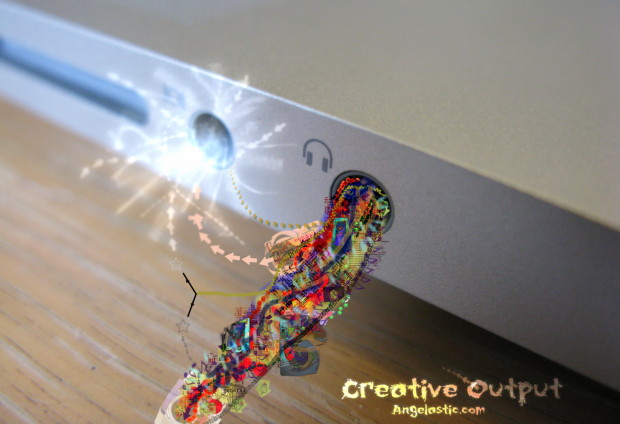 The postcards show a bit more of the Mac at the top, due to the different aspect ratio.

For the poster I chose the ‘standard’ size with the closest aspect ratio to the original picture, since a standard size will make it cheaper for anyone who wants to order a framed version. The poster is 19″x13″, and at that size it should be about 210ppi; I can’t do much better than that since it was based on a 12 megapixel photo. This is higher than Zazzle recommends for a good-quality print, and it should be fine for a poster, but if you’re a real print aficionado who prefers higher ppi, you can choose the ‘extra small’ option in the Size menu.

I don’t need extra money at the moment, since I still have a day job (though I will be looking for a new one next year; does anybody need a programmer who knows some things about accelerating particles and also occasionally writes, studies linguistics, and doodles on photos?) and since the payments from Zazzle will go into my PayPal account anyway, I will lend them on Kiva until such time as I need them.

And now for some unrelated news: If you are interested in linguistics, a few free online courses at the University of Marburg have opened up for registration. I did most of the first one at the end of last year, and I found it pretty interesting. There are occasional eccentricities due to the course being run by a non-native English speaker on a web platform developed many years ago, but there’s still plenty to learn. I enjoyed learning to identify the sounds and symbols of the phonetic alphabet.

Also, at some point during the 13th International Conference on the Short Story in English, in Vienna, I will read some people a story. I hope it will be good. It might be a revised version of Valet de cœur, since I think that would be fun to read aloud, or it might be something else. Any suggestions?

This entry was posted on June 9, 2014, 3:26 pm and is filed under News, Publishing. You can follow any responses to this entry through RSS 2.0. You can leave a response, or trackback from your own site.